Preamble: We have arrived in Bali the night before the first day of term and Yoel has been at Green School for the last eight weeks. The priority has been to find a place to live, to get our bearings and to start the academic year well. It is often a juggling act to meet the present, to be prepared for what is coming next, and to take stock of what one has learned. It has always been our intention to share our trip high-lights, so without further delay, here is the next instalment of our journey. We also intend to report on our tree planting project that we are devising.

The floods in Southern China and North Vietnam were responsible for the cancellation of our train to Hanoi – the authorities could not tell us how long it would take for the service to resume – so we took a coach to Ha Long Bay in the North of Vietnam instead. We are so happy we made the detour, as it provided us some of the best moments of our journey.

One of the drawbacks of travelling overland is the number of visas one needs to have. As we crowd-funded for this trip, it was not until six weeks before departure that we decided to go ahead with it. It was therefore a bit of a race to get all the visas in time. The Vietnam visas were the last one in line and we got the passports back only two days before our journey started. Unfortunately, there was a mistake and Yoel’s visa was one month off – instead of July is stated June. Out of desperation I did something one should never do I altered the visa on the passport with a thick ballpoint pen to correct the mistake.

I did not tell anyone – not even Yoel – and hoped that we would get away with it. By the time we had reached China and seeing how finicky border officers were, I started to worry and was apprehensive that our trip would get badly delayed because of it. So in Beijing, we went to the Vietnamese Embassy to find out if they could rectify the mistake. On giving the passport, the woman at the desk told us that the visas were Ok – I pointed to the correction and asked if we could get a stamp to make the change more official. As expected, it was not possible and the only solution was to apply for a new visa at a cost of 580 Yuan (£60/$110). Now, our budget was very tight and we could not really afford this. We filled in the form and on handing out our passports, we realised that we did not have enough cash on us. The woman kept hold of the application form, gave us back our passports and told us of a place we could find a bank. We never came back.

At the Chinese border, the moment of truth came. The Chinese control officer noticed straight away that the date had been changed, asked us to move aside and called one of his superiors. Rather out of character but determined that I was not in the wrong, I argued that we had been to the Vietnamese embassy in Beijing and were told that the visa had been ‘approved’ – omitting the rest of the story. After a little hesitation and a phone call we were allowed to leave the Chinese territory. On the Vietnamese side, the officer paused on seeing Yoel’s visa but gave us the entry stamp without asking a question. We were not in China any longer and everything changed scale.

We got onto a minibus and drove down a valley following a river to the sound of Vietnamese pop music. The North Vietnamese landscape was most beautiful and it felt good to be in a region less marred by industrial progress. We passed quarries and timber mills, but the mountains seemed healthily green and the valleys neatly cultivated with rice paddies. 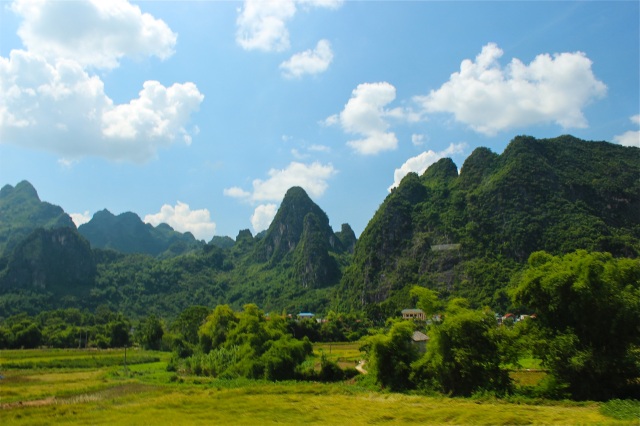 The architecture looked very different too- most of the houses were narrow and oblong with interestingly detailed facades with balconies and rarely more than than three stories tall. We passed a lots of red flags and communist banners glorifying labour and the people. It was hard not to notice all the Vietcong cemeteries and the plastic rubbish that were lying on the road sides.

We reached Ha Long Bay just before sunset and quickly managed to find a cheap hotel, looked at the view from our balcony and ate some instant noodles in our room. We soon realised that we had ended up in a tourist hotspot and it was going to take some skills to avoid the traps. A little online browsing pointed us to Cat Ba Island and  to the fact that we needed to leave really early in the morning to catch the first local ferry if we wanted to avoid the exorbitant tourist-boat rides and taxi fares once on the island.  And what a treat it was to navigate the iconic bay in the morning light.

The Cat Ba Archipelago, is made up of one large island surrounded by 365 islets of varying size but distinctively vertical and verdant. A large proportion of the island is a nature reserve which contrast starkly with the highly developed Cat Ba town and beach areas. As well as attracting tourists from all around the world, the Bay is a major holiday destination for the Vietnamese urbanites. At first we got quite overwhelmed by the place, the heat, the humidity and the constant crowds. Most of the hotels were full but we found a cheap room (without a view) on the top floor of a sea-side guest house. It was a good place to rest, sort out our luggage and wash laundry.  I asked the owners if there was a place to hang laundry and a woman took me to the roof top which had an amazing view of the bay.

On one hand we were eager to go the beach as it would be the first time in our trip when we could touch the sea, on the other we were reluctant to face the heat and the crowds. By the time we reached the beach it was pitch dark, but that did not deter us from getting into the water. There was a little light and music coming from the cafe and two couples sitting in the sand but apart from that we had the beach to ourselves. The water was so warm and calm it was like getting into a bath – we played in the water and looked at the starry night for the better part of an hour.

The next day we treated ourselves to a combined kayaking/ climbing expedition organised by a very well-run little company call Asia Outdoors. The staff were exceptionally kind and enthusiastic, whether it be the Vietnamese team on the boat who prepared a lovely meal or the American Kayak and climbing instructors who loved their job and luckily for us that day had only four other people joining our outing.

In the morning we paddled in the quite green waters to an enclosed lagoon that was only accessible by water through a low  natural arch. We swam in the calm water and were fascinated by the tiny fish that jumped out the water like miniature dolphins.

We got back to the boat for lunch and jumped from the roof top to cool off and spent the afternoon in the shade rock-climbing. All the equipment was provided and the instructors catered for varying skill levels. Yoel was in his element and managed to climb them all!

We left Cat Ba reluctantly to head off inland to Hanoi and then Laos. On board of the boat, we looked back at the beautiful bay wondering whether we would ever return. 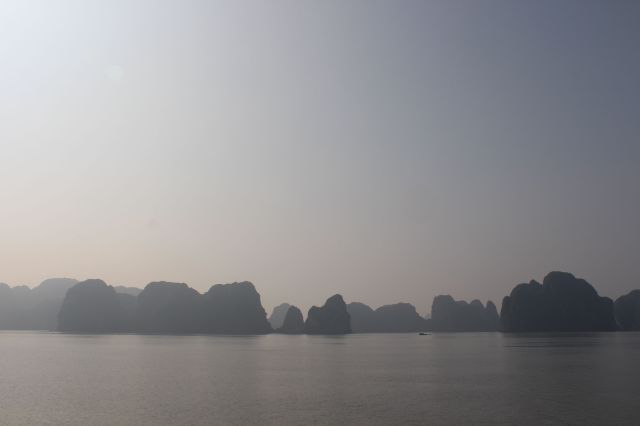 ← Mad(e) in China
Vietnam to Vientiane →